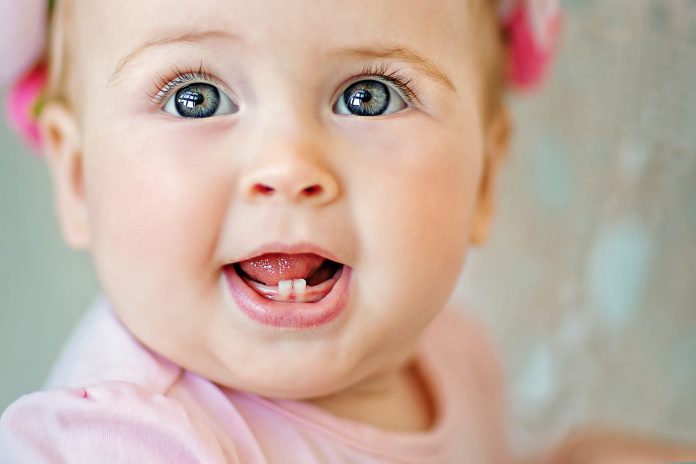 As our babies begin turning a few months old, we, as parents get excited about their next milestone – teething and introduction of solid food. However, we also know that the process of teething can be a difficult stage, both for the babies and their parents.

The first signs of teething can appear as early as about three months before the first tooth erupts. It is commonly believed that somewhere around six months of age, the teeth generally start to come out. It is only a general timeline and there can be many variations as developmental stages in small babies are extremely varied.

Most children have their complete set of primary teeth or ‘milk teeth’ as they are known, by the time they are 30 months old. The process of teething follows a general pattern with respect to erupting in the left side, right side or in the centre.

Below is a reference to the stages of teething as they appear in children.

The first to emerge are the two incisors (a pair of tooth with narrow edges, in the front, whose function is to cut food items) at the middle bottom side. They tentatively appear anywhere between the fifth and the tenth month. It is said that heredity plays a role in teething and a child is likely to have early teething if any or both his parents had so.

Next to appear are the pair of incisors at the middle upper side, somewhere between the sixth and the twelfth months.

The first continuous set of teeth that is visible inside the mouth of a baby is the lateral incisors that grow along the right and left of the upper central incisors. It is a joy to see their teeth starting to queue up.

Just like the upper set of teeth, the lower set also emerges anytime from the tenth to the 16th month. Since the upper and the lower set is clearly visible, their toothy grin can be a rather amusing sight!

As the baby grows and starts experimenting with more textures of solid food, the next set of teeth also starts to make their way.

The molars are the big and broad set of teeth at the back of the mouth used for grinding and chewing. In babies, the first set of molar appears at the upper ends of the jawline, on both left and right sides, typically between the 12th and the 18th month.

The molars at the lower jawline come out next, during the same time and like the upper molars, they erupt at both sides.

The next set of teeth to develop in babies are the canine teeth that help to tear food and are located behind or adjacent to the incisors.

The canines can appear in babies from 16 to 22 months of age. They fill in the space between the incisor teeth and the first molars.

The canines situated at the lower side also come out during the same time and now their grins are even more adorable and fuller than ever before.

The set of second molar teeth that come out next are situated right behind the first molars, and they are the baby’s farthest back teeth before they get the wisdom teeth (during their teenage or adult life).

The molars at the posterior come out first in the lower jaw first, between 23 and 31 months.

The upper second molars erupt within 25 to 33 months. They are the last teeth to finally complete the radiant smile that the child carries.

The primary set of teeth plays an important role in the developmental milestones for babies. They form a basis for permanent teeth to appear, give proper structure to the face, gradually shape their eating habits, ensure proper nourishment and lastly, help to form articulate speech.

Why Is Your Baby Not Sleeping Deeply?

How To Cut Baby & Toddler Hair At Home

Why Is Your Baby Not Sleeping Deeply?

Easy Tips To Get Pregnant as Soon as Possible

How To Have a Healthy Pregnancy

To be updated with all the latest news, offers and special announcements.